I'm back with another update. I'm pretty beat as I spent 14 hours at the park yesterday to catch some rides, check out and watch construction, and later check out Great America's Halloween Haunt (which was completely awesome!).

During the Haunt event, their Slaughter House maze line provided some nice views of Gold Striker, a nice, unobstructed ground level view. With tweaking some settings on my camera I was able to get some night time shots of this coaster going up! 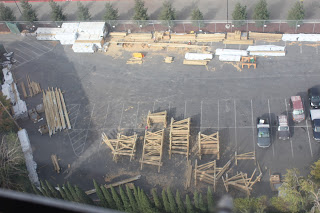 Some bents are assembled. They now patiently wait to go to their appropriate slab and go vertical. 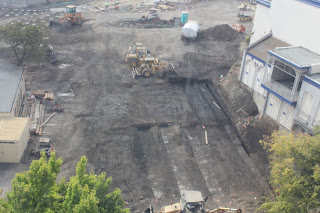 Some ground prep has begun over in the lift and brake run area. This happens to sit right next to the "Club Blood" maze exit. 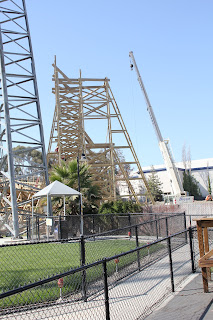 Some new vertical construction! This is coming out of the first turnaround going into the slight "double-down." See that opening about halfway up? That's the final turn into the brake run. This should provide plenty of head choppers! Note the height of that brake run as well. 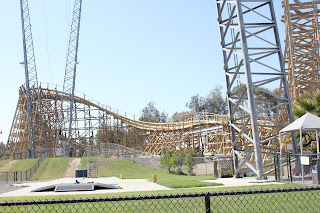 Another 'double-down' coming out of the swooping turn. Note the steel bridging used between cement slabs. I think this was due to the awkward situation with the terrain in that given spot. 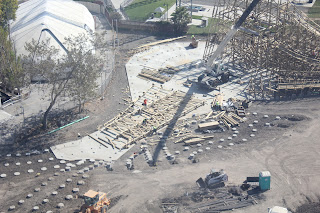 Construction crew was out in full force earlier in the day, preparing the next bent. Should be going up really soon! 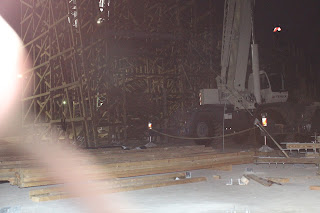 And for some night time Gold Striker construction (sans the construction crew). Sorry for the washed out image, it was tough photographing something quite a distance away in a dark area. 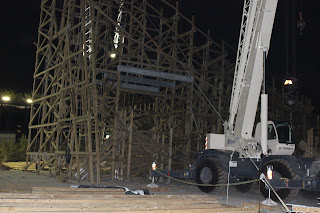 Swooping downward before making way for the "Midway turn" out towards Celebration Plaza. More headchoppers to be had with this tight hugging turn! 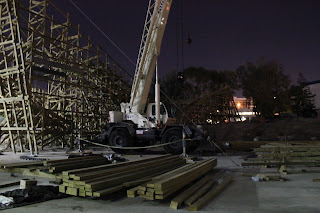 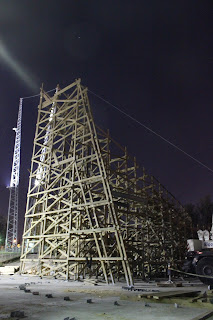 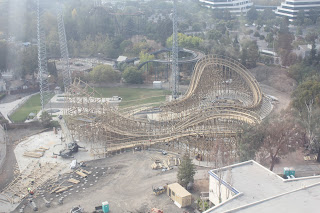 I'll end it with a day time overview of what is done so far! Thanks for reading and stay tuned for the next update (which could be this coming weekend, will most likely be evening shots only from ground level).
Posted by Thrills by the Bay at 20:18