Gold Striker Review! Was it worth the hype?

Gold Striker has been running some laps the past couple days with riders on board as California's Great America had a promotional shoot going on. The park has had camera crews filming the new coaster in action, complete with riders in tow at almost every possible angle. With the promotional shoot going on, this could only mean some nice, early rides on the park's hottest coaster! 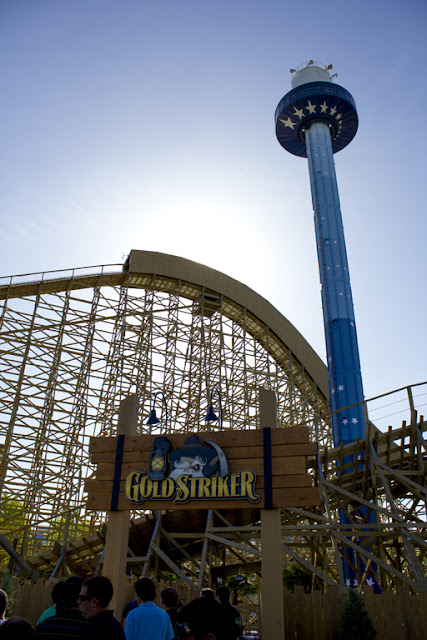 As you all know, Gold Striker was officially announced back in August (August 29, 2012) but had broken ground approximately a year ago. Almost a year later it's taken on it's first riders. Gold Striker is the park's first major attraction of this scale to come in many long years! With the many attractions actually being removed, it only left fans wondering which ride was next on the chopping block. But with the addition of Gold Striker, I like to call this a new beginning for the park. So, was Gold Striker worth the hype?

I was one of many riders who were selected to participate in the promotional shoot and between the  4/30 shoot and the 5/1 shoot, I've gotten in 17 laps in almost every row. In short, I'd like to say that Gold Striker is a more than welcome addition to the park. Let's take a look why.

Getting In Line:
Starting off with the queue, you enter under the ride's first drop, just past where the train comes rocketing out of the descent tunnel. You will have many times entering the ride and have a train screaming overhead! Once you're inside of the coaster area, you go through several sets of switchbacks. This area offers some amazing, up close views of the track. Even behind a fence, there are plenty of photo ops. Also, having a train screaming by you as you wait in line only builds up the anticipation of actually riding! About wait times: With about half of the switchbacks used, I timed a 30 minute wait that seemed to go by insanely quick! After you navigate through the switchbacks, you pass back under the first drop and run along the track heading towards the ride's signature speed hill.

I like to call the "Mine Shaft" themed portion of the queue the 'almost there' mark as just a bit after is the flight of stairs up to the station. The rest of the queue keeps pretty close to the track so if you have some friends ahead of you, you just might be able to snag a photo of them!

As you head up the stairs, the path is literally adjacent to the track, and the park had actually installed mesh to keep guests in line from reaching out toward an oncoming train (which can be insanely dangerous if such happened). Finally we reach the station.

The Ride Experience:
My first ride took place in row 12, the last row of the train. As soon as I got seated, locked in, checked, and dispatched, my body just started getting the chills...as in, I can't believe the day has come to ride Gold Striker! Once you pull out of the station, the ride takes you through what I like to call a 'taster' which is something common of wooden coasters. There is some fun, gentle laterals as you make way toward the lift! After a quick climb up the 108 ft peak, the descent tunnel comes to greet you. While it isn't quite pitch black as initially anticipated, it is pretty neat plunging down and seeing the framework overhead whizzing by. This gives the illusion that your hands will get chopped off. In the back row, you gently come up out of your seat, giving you your first moment of zero gravity/air time!

As soon as you come out of the tunnel, it feels like the ride just suddenly floors it. The forces are quite strong and after a quick directional change, you go flying into the speed hill. At this moment, your butt is out of that seat for a nice period of time. A nice added feature was the overhead beams, that look like an open mine shaft. Great head chopper moment for sure! As you go plunging back down from the speed hill, you dive under 3 sections of track that pass by overhead. As you hit the bottom of the small drop you are finally planted back in your seat. But for how long? Not very long actually! As you enter the first turnaround, your are quickly back out of the seat before being forced into the seat with some nice positive G's. Coming out of the first turnaround, you are once again experiencing some nice ejector airtime, and once again greeted by some good positive G's.

The second turnaround starts you off with yet another moment of ejector air, combined with laterals. This is where some 'body slams' will begin! As you head up that turnaround, you are firmly pressed into the seats until  coming out, where again, you're experiencing another moment of air. Starting from this point is what I like to call "Airtime Alley" as you get a series of 4 strong pops of air back-to-back. Yes, the entry into the midway curve (facing towards Celebration Plaza) gives yet another strong moment of air!

After coming out you experience a 'sudden drop' accompanied with a head chopper from the brake run overhead, followed by the ride's strangest moment: the double up! If you are not paying attention, this moment will catch you by surprise! The double up provides double pops of air followed by a good 'body slam' moment. Coming out of one of the final turnarounds, you're greeted with a final pop of air. Finally entering the brake run, you can tell that the train is still retaining much of its speed but is slowed down smoothly via magnetic brakes. 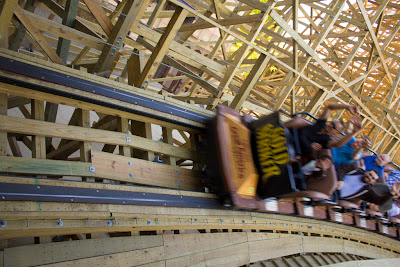 After the first round on this, I realized that this ride was designed to be a 'hands up' kind of ride! Keeping the hands up vs hanging on for dear life provides a whole new experience! The ride's moments are thus enhanced as your body's more free to move about. But since this was a promotional shoot, the park requested that hands stay down so nobody's faces would be blocked out. After all, they would like to capture the rider's expressions!

Final Verdict:
So in the end. Was Gold Striker a hit or a miss? Well, let's just say, Gold Striker is relentless and it completely surprised me! I counted 14 moments of air in the last row. As you sit in different rows, forces are applied differently and you may feel more positives than negatives, as well as feeling some of the directional changes differently. After riding virtually all of the rows, I'd have to say that the last several rows were my favorite when it comes to looking for airtime. If you're after the forceful positives, stick toward the front. Toward the middle gives a nice mix of both. In the end, this ride is going to be a huge hit. Not only will it be a huge hit for the park but it just may bring in a lot of people across the nation to try it out.

Gold Striker is set to open some time in May. The actual date has yet to be confirmed. But once it is open, you should get out there and ride it ASAP! Also I'd like to give kudos to GCI for making such a great coaster, as well as to CGA for putting on such an event and giving all of us an early opportunity to ride the coaster before it opens to the public!
Posted by Thrills by the Bay at 23:34