Winter Visit to the 'Walk

You find yourself in an odd, yet pleasant place. You pick up a plethora of different, pleasing sensations: The smells of oceanic brine, track grease, the smoky scent of grilled food, garlic fries, funnel cakes, and the list goes on. The seaside weather has a mood, and can change from clear blue skies to overcast to even raining in as little as a day. The most noticeable aspect of this place to you would be that there are various recreational activities for you to do, everything from an eclectic assortment of amusement park rides to an arcade filled with fun games to play, the old seamlessly blended in with the new…

…and it is all set on a Northern Californian beach right next to the great Pacific Ocean.

This place is none other than Santa Cruz Beach Boardwalk. Opened in 1907, this oceanfront amusement park is currently one of the few remaining examples of its kind, and is still going strong today. The Boardwalk has been ranked multiple times as the #1 seaside amusement park in the world by Amusement Today’s Golden Ticket Awards, and it isn’t hard to see why. With great rides, great food, fun games, and a beautiful setting, Santa Cruz Beach Boardwalk is one of the top attractions on the California coast. 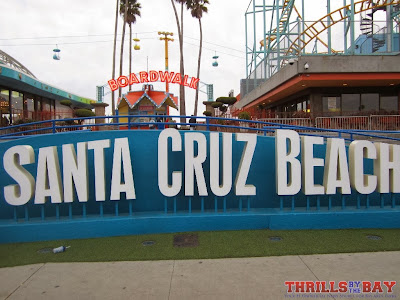 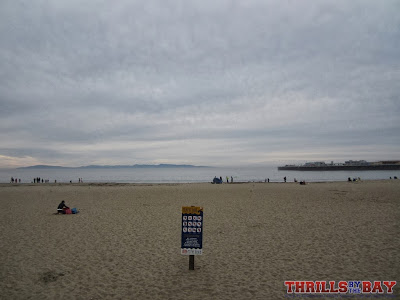 Without further ado, let’s dive right in and check out what the Boardwalk has to offer. First, we have the Boardwalk’s most recent addition to its ride collection, Undertow. This new for 2013 Maurer Söhne spinning coaster replaces Hurricane, a steel coaster of similar caliber that operated from 1992 to 2012 and got relocated to Western Playland in New Mexico this past year. 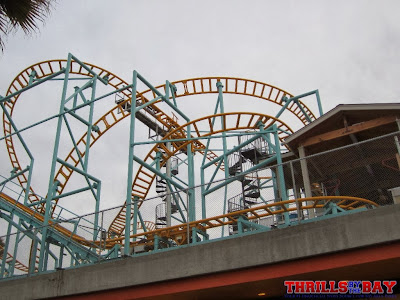 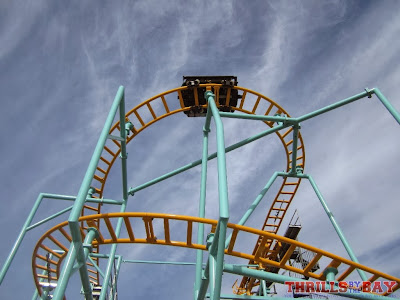 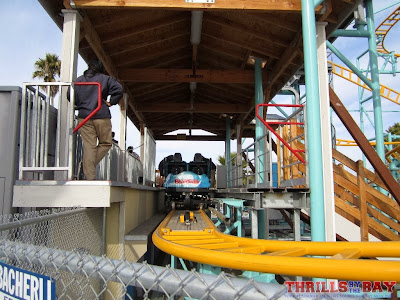 Undertow is one of the newest variations of Maurer Söhne’s “Xtended SC 2000” off-the-shelf model of spinning coasters. It has almost exactly the same layout as other SC 2000s, but the track and supports are slightly modified from previous variations of the same model. Some of the turns have slightly smoother profiling as to avoid painful jolts and increase reridability, and the footprint dimensions are also a little different.

Undertow was scheduled to open this past summer supposedly right around 4th of July, but got delayed for months due to some teething problems with construction. In layman’s terms, Maurer Söhne delivered the parts in a weird order, say you get delivered the chain and handlebars of a bicycle before the frame and the wheels. Further complications came up when the track didn’t fit together, supposedly a mistake made in the Maurer Söhne factory. This forced the Boardwalk to get a local contractor to literally bend the track into place. Testing then began in early fall, and the ride finally soft opened on October 19th, 2013. A grand opening ceremony will be held for the ride in spring 2014.


On to the ride itself, Undertow delivers a different ride experience every time due to the cars’ ability to spin freely as they go. The ride has a mixture of drops, twists, and turns that’ll feel different with every ride! The cars track smoothly, making it very reridable. Lastly, just like almost every other ride at the Boardwalk, operations are very efficient. I recorded dispatch times of as low as 24 seconds on my visit, which is well above average for a coaster running single car trains. I never waited more than 15 minutes on my visit, which had a fair amount of crowds for being a limited op day. Combine the efficient operations with the kinks getting worked out, and this ride will be in prime shape for its first summer. 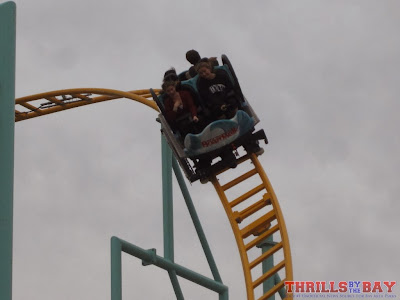 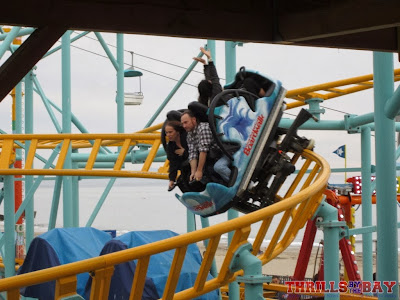 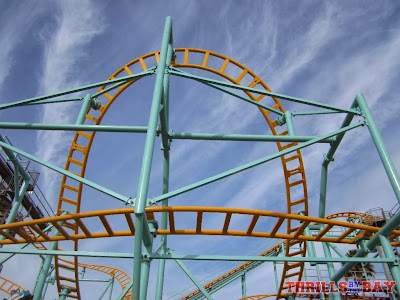 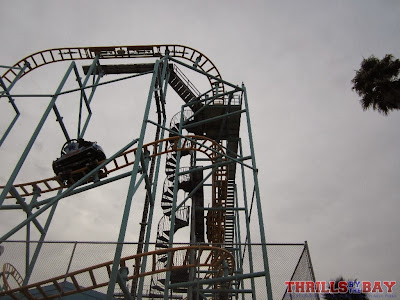 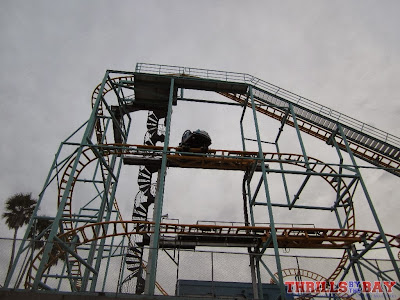 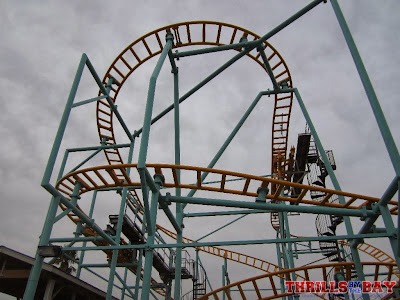 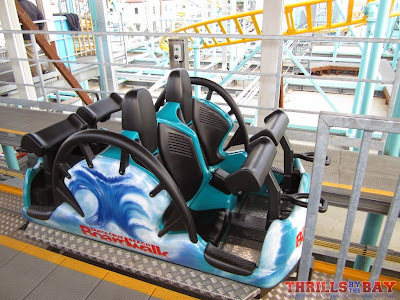 We now move on to some of the other Boardwalk attractions, starting with the most famous of them: the Giant Dipper. In brief, the story of this wooden roller coaster is that the Boardwalk had an LA Thomson scenic railway, but it wasn’t thrilling enough. They called up legendary (for the time, and still now) coaster designers Tom Prior and Frederick Church (Prior & Church, or just P&C) to design a thrilling new ride that would be taller, faster, and crazier than the scenic railway. Arthur Looff (son of Charles Looff, who made the Boardwalk’s carousel in 1911) supervised the construction of the woodie, which sprang up in just 47 days and cost a mere $50000, something a park can only dream about today! Giant Dipper opened on May 17th, 1924, and has been thrilling riders ever since. The ride is meticulously maintained and runs smooth all the time. Not only that, but the ride itself still packs a punch with some good airtime and almost unparalleled laterals. Operations are very efficient on the Dipper, with the 6-car trains getting dispatch times of almost always under a minute. This is an absolute must-ride when visiting the Boardwalk! 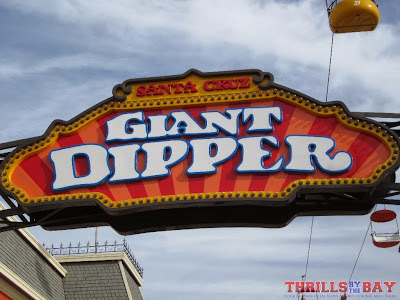 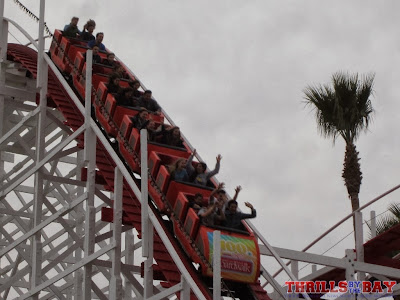 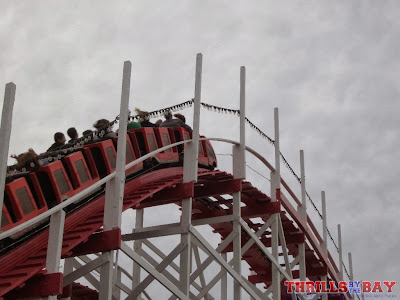 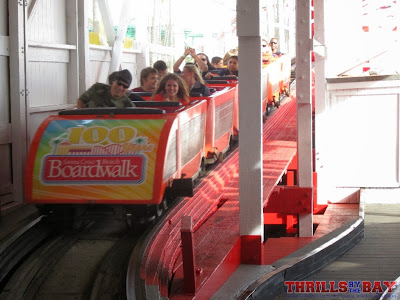 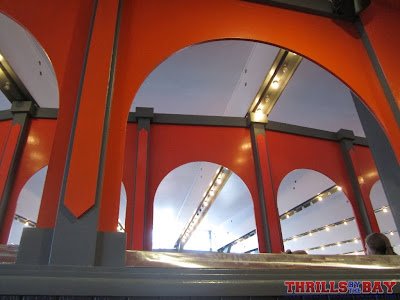 The next set of pictures will cover some more Boardwalk attractions, enjoy! 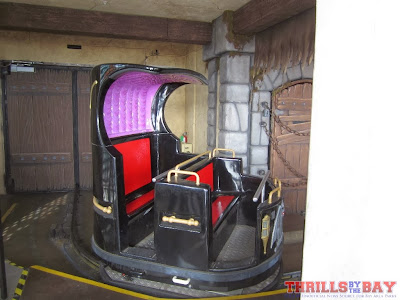