Some interesting news regarding the AFX theater and an explanation why Funhouse Express was not part of Haunt this year. First off, the AFX made its debut in 1994 with Paramount movie-themed attraction "Days of Thunder." Over the years, different shows had came and went, with the recent Happy Feet that made its debut in 2013. 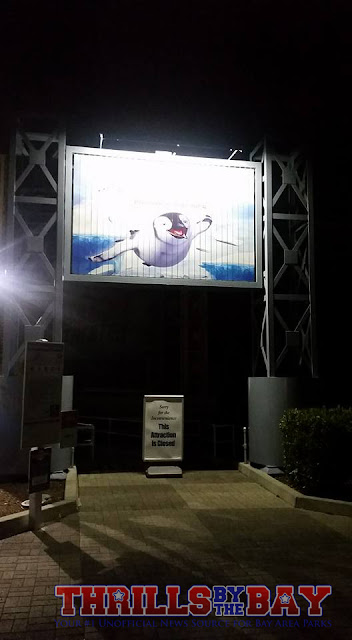 We noticed Funhouse Express was not part of Haunt this year and that the AFX theater was closed. Now it makes sense and here's what's going on.

SANTA CLARA, CA – California’s Great America and Electronic Arts (EA), a global leader in interactive entertainment, are teaming up to create a first-of-its-kind guest experience at Great America. The dynamic new attraction will feature settings and characters from EA’s critically acclaimed Mass Effect™ videogame series developed by BioWare™ and will open next season in a newly renovated Action Theater.

Riders will climb aboard motion-based seating and wear 3D glasses as they are taken on a thrilling adventure.  A live performer will curate the journey and appear to interact seamlessly with the next generation 3D visuals.  These elements will be integrated with motion seating, high tech sound and other 4D effects to create a truly compelling and immersive attraction.  Guests will travel through space to a distant planet, face off against bigger than life adversaries and ultimately help save the day.

“Partnering with a world-wide gaming leader like EA will enable us to build an incredible user experience for our guests,” said California’s Great America Vice President and General Manager Raul Rehnborg. “This combination of technology and creative videogame content is sure to usher in a new wave of entertainment innovation in amusement parks.”

“EA and BioWare are thrilled to partner with Great America and see one of our most iconic games turned into an exciting high-tech attraction,” said Patrick O’Brien, Vice President of Entertainment and Licensing, EA. “Having a partner who shares our commitment to thrilling our fans is extremely important to us and we look forward to building an attraction that will appeal to the Mass Effect fan-base and introduce it to many more.”

So while we don't know much more about this, AFX looks like it will be receiving an overhaul for the 2016 season bringing in modern tech as the existing equipment is very outdated. We aren't quite sure yet if this will be an interactive experience. Only time will tell.
Posted by Thrills by the Bay at 10:31