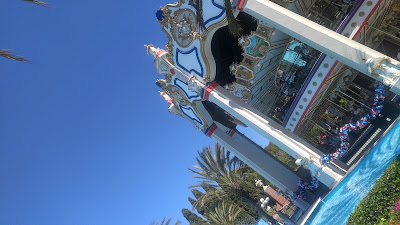 We just got through opening weekend at California's Great America when we found out about Great America's rather bright future. Matt Ouimet, Cedar Fair's CEO was at CGA today to discuss the direction Cedar Fair wants the park to go. In the end, this eliminated all of the rumors of the park going under on various theme park fan sites and shows the commitment Cedar Fair has with the park.

While Cedar Fair owns and operates the park, the City of Santa Clara owns the land the park sits on. Cedar Fair plans on purchasing the land and is filing an application to rezone the property. Currently, Cedar Fair has a long-term lease on the land that goes to 2074. The long term goals they have with the park include a number of things that will make this a destination to go to, and would include the following:

We've been looking at this image and looks like the area highlighted in Orange could be tied with other things like Stadium Events. While we don't want to stir up any rumors, we found it interesting that Logger's Run is highlighted as part of the Boomerang Bay attractions.

Right now though this is all an idea/concept and only time will tell as to what's to come as there's a number of studies to be conducted (noise, traffic, environmental impact, proximity to SJC) but hopefully in the next year or so we'll start seeing some of these things come to life! In short, CGA isn't going to be sold off to make way for more houses we don't need, or more empty offices in Silicon Valley (Yes, there's a lot of vacant offices in the vicinity).

What do you think of this announcement? Let us know in the comments below!