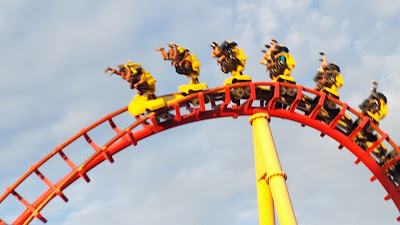 The VR (Virtual Reality) fad continues to spread among the Six Flags properties as Discovery Kingdom's Kong attraction will be getting the VR addition for Fright Fest. "Rage of the Gargoyles" is being dubbed "Northern CA's first VR Coaster," in which riders wear specialized headsets that play back a virtual world as you pilot a helicopter through the city. When you turn your head, the camera also rotates. The camera itself follows a path that's identical to the roller coaster's track layout. 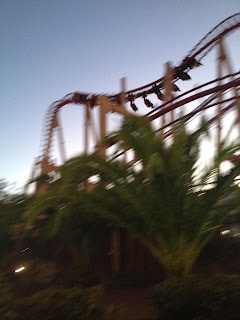 It was also noted that Kong will be receiving modified restraints - we're hoping for the newer "vest style" restraints that will provide a much better ride. While the VR will be an interesting feature, we're actually more excited about the modified restraints, which will bring Kong to a more comfortable ride. Currently, Kong (along with other Vekoma SLC's) are infamous for providing rides with "head banging" and uncomfortable jerking motions. Kong's current restraints feel like they're punching you in the ears and beating the rest of your body up. 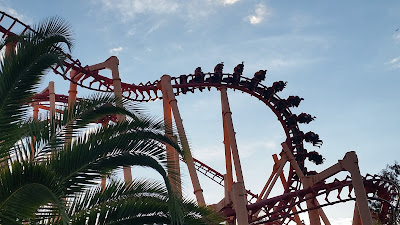 Modifying the restraints would also be a wise move because of the headsets that are being worn. I've already had discomfort from wearing my sunglasses on the ride and opted to just take them off despite the secure strap I had. Having a much more bulky item could provide more discomfort with existing restraints, not to mention the possibility of the headset getting knocked off.


Get Ready to Engage in an Epic Battle in Rage of the Gargoyles, Northern California’s First Virtual Reality Coaster
Six Flags Discovery Kingdom to Debut Innovative Horror-Themed VR Coaster Experience for Fright Fest
VALLEJO, Calif. — August 5, 2016 — The ultimate interactive Virtual Reality (VR) coaster experience, featuring Samsung Gear VR powered by Oculus, is coming to Six Flags Discovery Kingdom this fall as demonic creatures battle terrified riders in the all-new Rage of the Gargoyles debuting on Kong, the park’s floorless looping roller coaster, just in time for Fright Fest® starting September 24.
“Six Flags is the leader in innovation and thrills and we are excited to introduce the VR coaster experiences to our guests at Discovery Kingdom,” said Don McCoy, park president. “In Rage of the Gargoyles, the experience is immersive and terrifying as riders shoot at the demons throughout the entire ride ‒ the perfect addition to our Fright Fest line-up.”
Among the thrilling highlights:
·        High-definition imagery and storytelling that sync with the track configuration creating a one-of-a-kind “real world” to “virtual world” thrill-ride;
·        For the first time ever on a rollercoaster, riders can engage in interactive gaming throughout the entire ride experience by shooting at flying demons; and
·        Unique sophisticated head-movement targeting to instantly lock on a moving target without the need for a touchpad or buttons to fire.
The realistic theme puts the rider in the action similar to a video game experience. Riders are pilots seated in the cockpit of an Apache-style helicopter, flying through a devastated cityscape of a dark and dreary future as part of a fleet of choppers ready to battle winged creatures to the end. Both the pilot and their realistic foes are virtually engaged in a battle all while racing over the 2,170 feet of twisting, turning, looping coaster track.
The action starts quickly when riders ascend up the lift hill while realistic, blood-thirsty gargoyles terrorize them by scratching and clawing, jumping mercilessly atop the seemingly fragile glass barrier as the rider tries desperately to shoot their demonic targets. The epic conflict accelerates as riders are forced to navigate through the hazardous city streets, up and over broken-down skyscrapers while avoiding obstacles and lethal assaults from the gargoyles, all the while shooting to repel the demons. It is up to the pilot to attack the vicious master gargoyle, who is vehement on challenging anyone who crosses his path. There is a surprise ending that will be sure to leave riders shocked and amazed.
Kong will close after August and make its Virtual Reality debut with modified restraints and enhanced track work. Guests 13 and older may opt to ride with the VR headset or without, to enjoy Kong as a traditional coaster attraction. Fright Fest is Northern California’s biggest and scariest Halloween event as the park is completely transformed for thrills by day and fright by night, and features haunted mazes, scare zones and monstertainment.