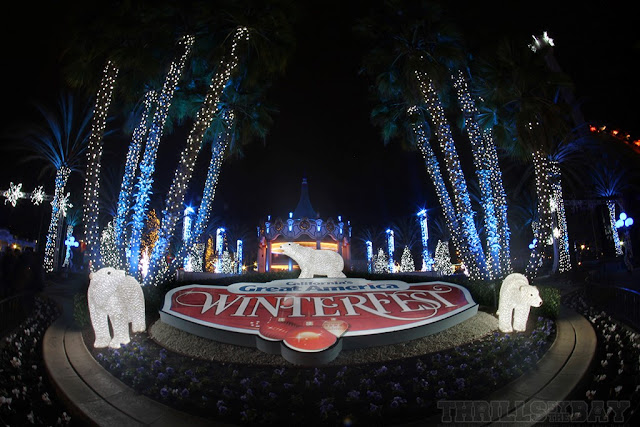 Several seasons ago, it was unheard of to visit a theme park after Halloween events came to a close. Six Flags Discovery Kingdom has had their Holiday in the Park event for several years now and this year, Great America steps into the arena with their brand new WinterFest event.

Typically when something is done for the first time, it's done in baby steps, to test the waters before going all out. The creative minds behind the WinterFest event had a different frame of thinking - to go all out. Needless to say, WinterFest has now created a new standard for theme park holiday events in the area.


As you enter the park you find that the  iconic reflection pond has been transformed into an ice skating rink dubbed "Snow Flake Lake." For a small fee ($15) one can book a 30 minute session out on the ice rink (made up of real ice too, not the synthetic plastic "Glice."

Just beyond the iconic Carousel Columbia stands a 60-foot-tall Christmas tree. Before the night begins, the park kicks off with a nightly tree lighting ceremony featuring a choir and special guests to help light the tree. The ceremony features a number of holiday classic songs and the lighting of the massive Christmas Tree!


A handful of rides are open, giving a selection of gentle and thrilling rides for everyone. Gold Stiker and Flight Deck are included in the list of high-thrill attractions. One of the attractions received a holiday overlay, the park's iconic Star Tower which has been transformed into the "North Pole." The North Pole has a custom onboard soundtrack with narrative based off the "Night Before Christmas." We were delighted to hear a subtle Easter egg that was dropped in the ride's audio and We're sure other Haunt fans were excited too!

If rides aren't quite your thing, there is still a ton to do at the park with plenty of live entertainment around the park. One of our favorite shows there was Tinker's Toy Factory as it tells a meaningful story and depicts some of mishaps with our current generation of youth as one of the lead elves feel that kids don't care to play with simple toys these days.


Also be sure to check out the ice skating spectacular, It's Christmas, Snoopy! This show takes on a more milder/relaxing pace as the Peanuts crew tell the true meaning of Christmas. Other shows include Jingle Jazz, a group of acapella singers who do frequent shows in the Hometown Gazebo, Cool Yule - a choir singing several favorite holiday tunes by the 60-foot tree, and Holly Jolly Trolley where a small San Francisco-style cruises through Hometown Square, making a stop in front of the Gold Striker gift shops for a singing performance.

When not checking out the shows, there are plenty of eye-popping visuals throughout the park including Orleans Place, featuring high-energy music with lights synced to them. It's fun to walk through as the lights pulsate and change color to the rhythm of the music. 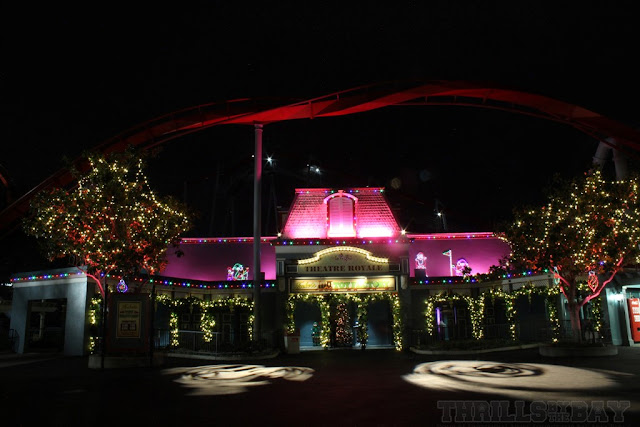 Another simple but unique area in the park is the Candy Cane Lane area. A small bypass was set up between Delirium and First Aid, taking guests up a small section of the employee service road. To mask off the would-be backstage area, chain link fences with holiday-themed banners cover employee-only areas as giant metal candy cane structures with overhead lighting dot the path.


Last but not least there are plenty of other miscellaneous things to check out in the park, from taking photos with different holiday characters to writing letters to Santa, to other various photo ops all over the park.


Did you get to experience WinterFest at California's Great America? The park will be going into daily op starting next week so if you haven't gotten a chance to get out to the park to witness this spectacular event, we urge you make it a point to do so soon! There's something there for everyone, young and old, thrill seeker and non riders. If you experienced WinterFest, let us know in the comments below of your thoughts, we'd like to hear from you!
Posted by Thrills by the Bay at 22:21