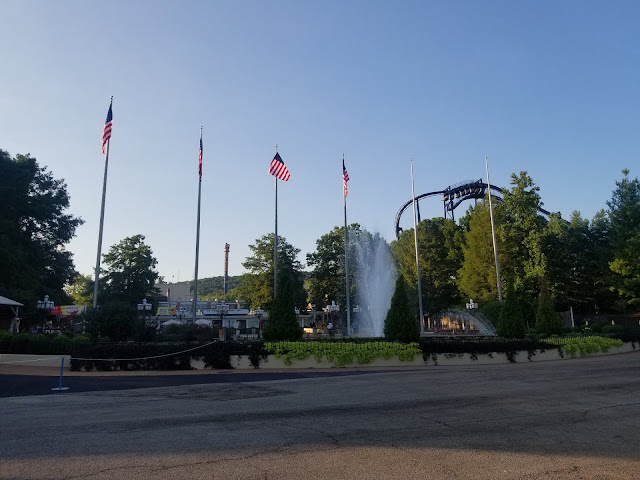 It's summer and everyone is travelling to various theme parks across the country. One of our family members was visiting a friend in the midwest and we came along for the flight and got to experience what many may see as the "underdog" Six Flags park: Six Flags St Louis - formerly known as Six Flags over Mid America.

Six Flags St Louis (SFStL) was one of the 3 original Six Flags parks, located just outside of St Louis, MO in the town of Eureka (about 30 minutes from the St Louis airport). While it's a Six Flags park (and as we know, among the coaster enthusiast community, Six Flags tends to get a bad rap for the Six Flags stereotypes including broken rides, trash everywhere, rude ride ops, slow operations, and ads plastered on coaster trains). SFStL seemed to have broken that Six Flags stereotype and came off as a nice surprise to us as it still felt like a charming park. There was the occasional ad posted in the park but we did not see a single ride vehicle with those ad wraps, nor did we see oversized ad banners plastered on every wall in the station.

While Six Flags St Louis isn't fully known for that big headline coaster that's going to pull everyone from the country on over to check it out, the park did have a nice lineup of coasters including 3 wooden coasters. With this said, here's a look at what they have and our thoughts on them. 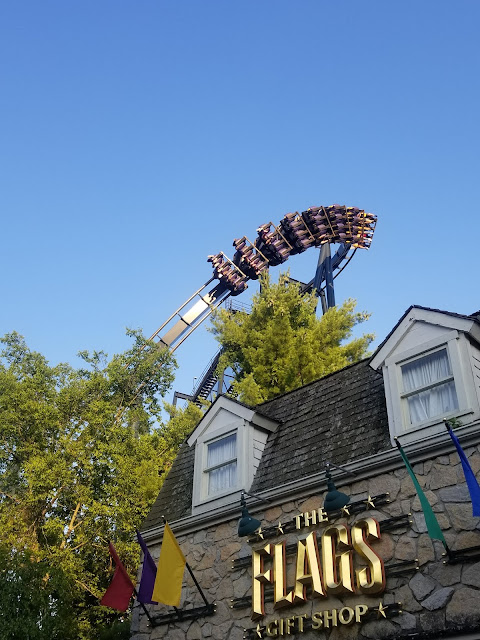 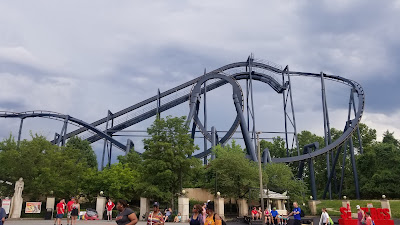 This Batman clone is a mirror image of the one down at Six Flags Magic Mountain. It features an excessively long queue path (with no shortcuts) and we were amazed at how many switchbacks there were (thankfully not being used) behind the station. Once we burnt some calories to get to the ride platform, we were presented with a very smooth and forceful Batman experience. The paint on the ride still looks fresh and we love the solid black color scheme on this Batman clone (I believe it's the only all-black Batman ride). Given that the waits were short/minimal, we only rode the front seat as we love a front-seat view on an inverted coaster. This one did not disappoint. 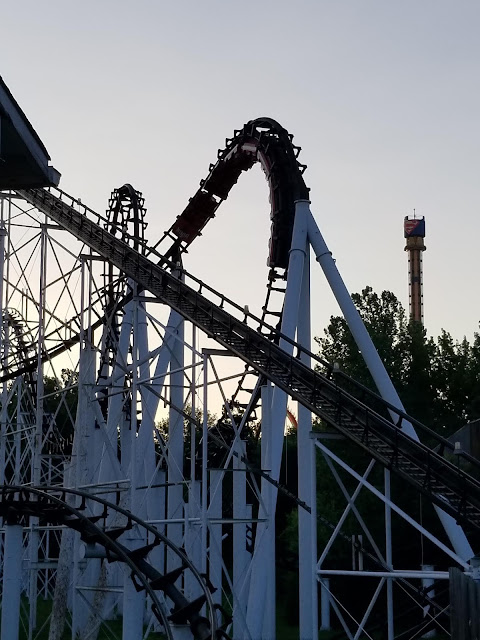 This was an interesting one. Ninja is a Arrow-started and Vekoma-finished steel looper. You'd think both names would be the perfect ingredient for disaster. I'd say, it was but it wasn't. Our first ride we took, we did second to the last row - the "Magic Arrow Seat" that offers leg room and doesn't appear to be as rough. It worked on CGA's Demon, Viper at SFMM and it worked on Corkscrew at Cedar Point. The only real rough patch was the sidewinder. We tried it in the front and regardless what we did, we got the "ninja experience" by getting our butts kicked by this. Steer clear of the front. 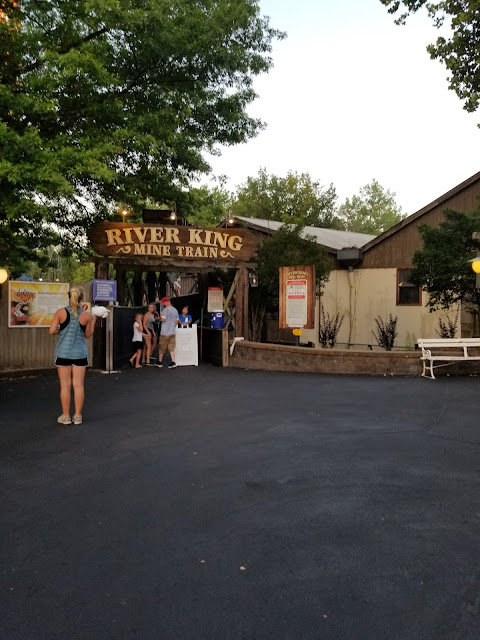 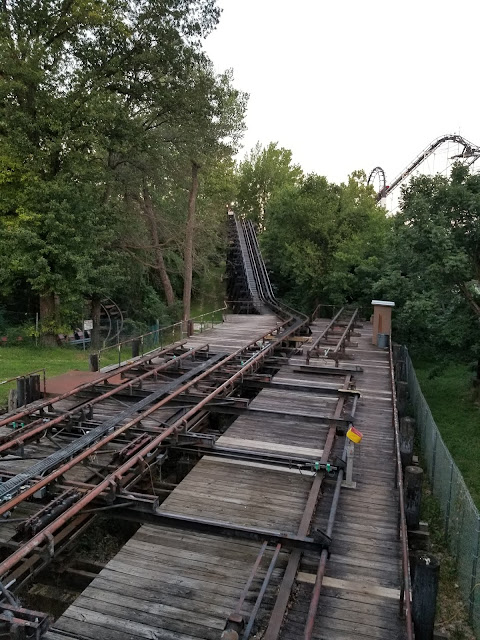 RKMT was the park's first roller coaster and orignally ran a pair of tracks. In the 80s, RKMT was converted to a standup coaster, known as "Rail Blazer" (not to be confused with CGA's "RailBlazer"). It was a short lived experience after having a fatality and converted back to a mine train, the way it was meant to be.

RKMT was a fun mine train and not too rough. We liked riding in the back as the finale involves an enclosed drop in pitch black tunnel. If you're in the very back, you get a great pop of air that comes as a surprise! 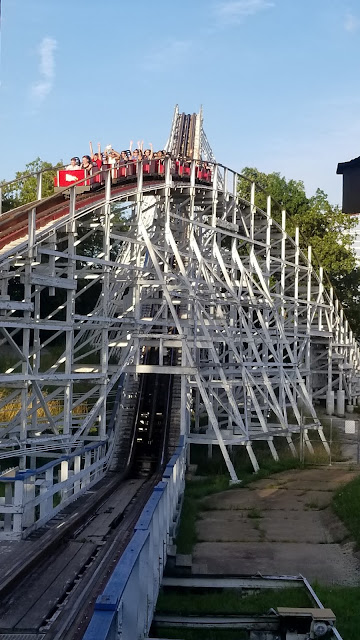 This coaster has some historic significance - it was one of the last PTC-built woodies and the last of John Allen's designs before he retired. Like Ninja, this ride is best experienced in certain seats. As I learned, avoid the 2nd rows of each train unless you want a full on body massage on what felt like square wheels. We did however love riding in the front and riding 2nd to last row. In the 2nd to last row there was 1 particular section with some great ejector air moment on the return trip. As this ride is situated in the back woodsy area of the park, it makes for some great night rides! 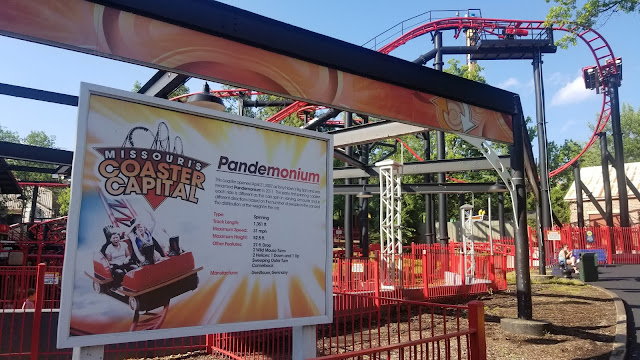 This is a clone Gerstlauer spinner. But it is a really good one and it actually spins! On a couple of our runs on it, we had the ride vehicle pretty well off balanced which left us with some quick spinning action throughout the ride, and remained spinning in the brake run! Pandemonium had some great surprise moments of airtime. It firmly seats itself as my favorite spinning coaster! 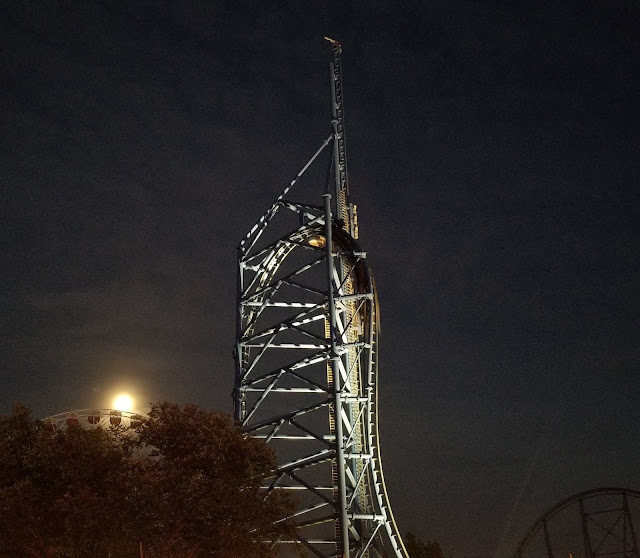 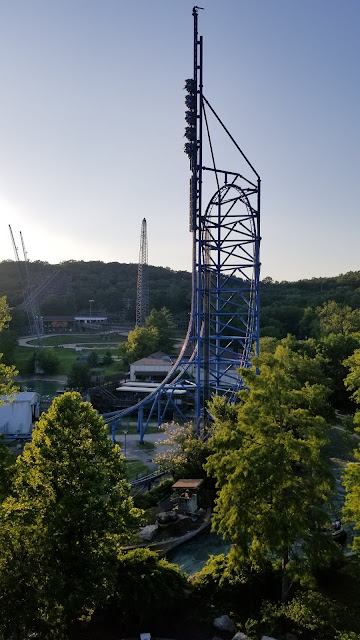 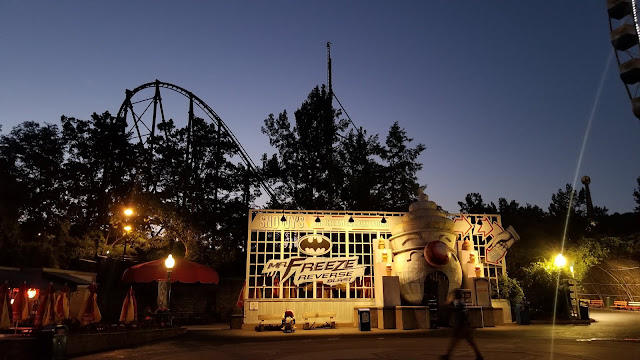 This is 1 of 2 "Mr Freeze" shuttle coasters and a mirror image of the one at Six Flags over Texas. This coaster launches you out of the station after riding a "transfer track" to the launch section. From the launch, you go through an inverted tophat, an overbanked turn and up a 218-foot-tall spike that continues to lift you skyward at a brisk pace before releasing you, all to do the course once again in reverse order. As of 2012, the trains were reversed so you launch out of the station backwards. When going up the spike, this left us with a really odd but cool weightless feeling. The ride also featured several pops of air, hangtime, and some nice positives. It packed quite a punch and it was my 100th coaster credit. 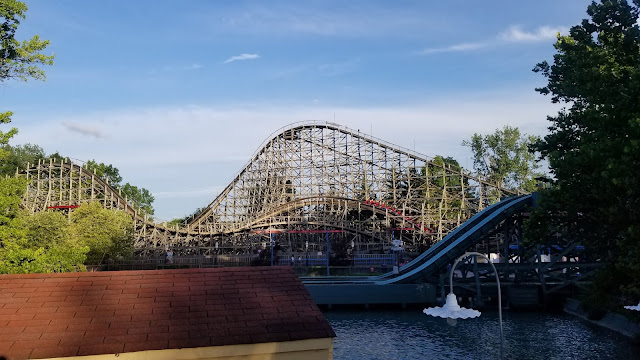 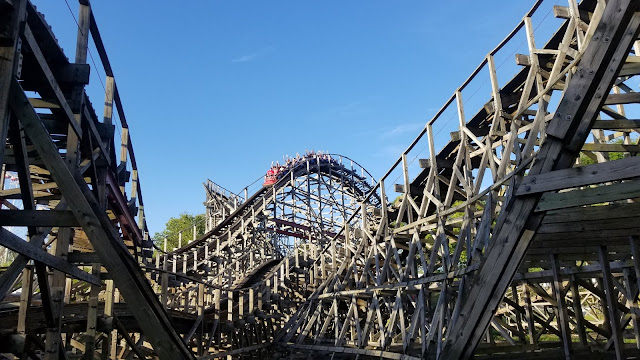 We like to refer to this as the under-appreciated woodie. This GCI wooden coaster opened in 2008 as Evel Knievel and was rebranded shortly after. Currently, the ride is running amazingly well and has several great moments of floater air and head chopper effects. We haven't heard much talk about this coaster leading up to the trip, nor have we heard much talk about it in general. It was a lot of fun and very rerideable! We preferred the front seat where we got numerous pops of air. Riding this at night is a must as it's not very well lit; it is not exactly easy to see where you are going. 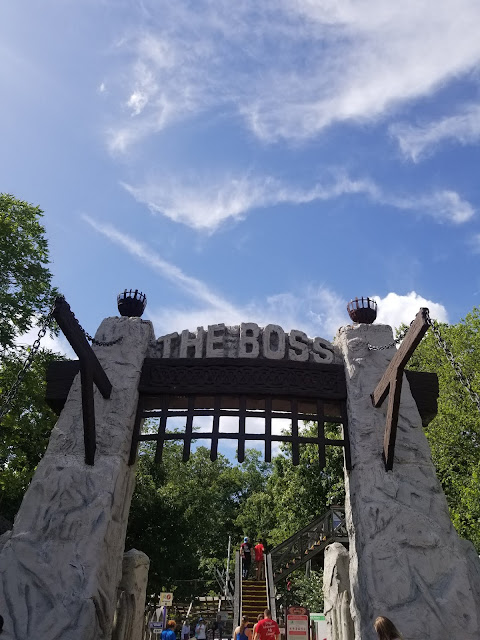 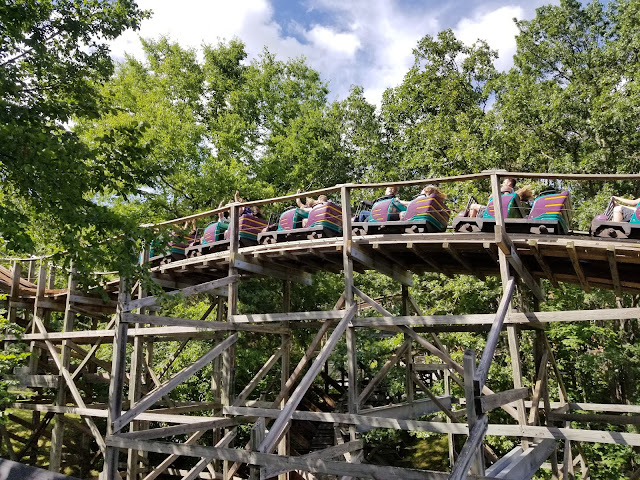 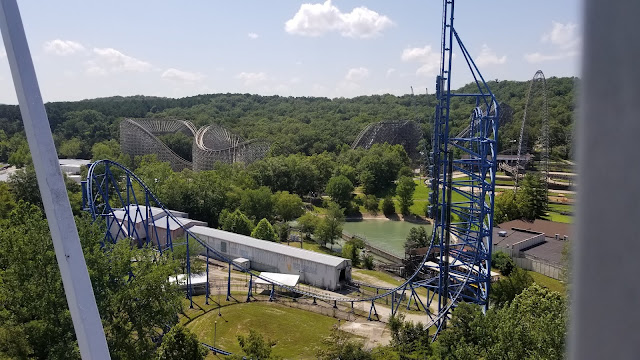 This is one of the star attractions at SFStL. This 150-foot-tall woodie resides in the far corner of the park and is spread out quite a bit along the hillside. The Boss features a double-down that you hit at 62mph as well as several airtime moments and strong "body slam" laterals - something that is quite fun to experience on a woodie. Opinions of The Boss are polarizing. For me, it was one of my favorites. It wasn't the smoothest coaster out there but I could see its potential for being a top-tier woodie much like Ghost Rider down at Knott's. Some say to "RMC it" while I feel like just giving it the "Ghost Rider Treatment" with the denser ipe wood and GCI trains would breathe fresh life.

We got to experience this in the dark once and it was quite a memorable experience. Sure, it wasn't riding The Beast at KI in the dark but it was still very thrilling. Highlight in the dark was not being able to see that double-down and having it feel like the floor dropped from under you. 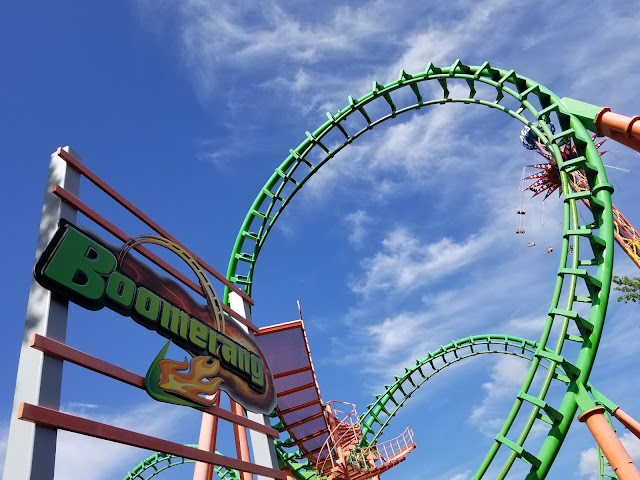 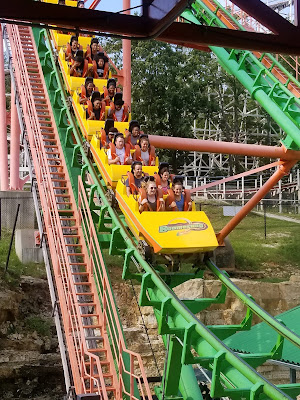 Oh, Boomerang...sorry that we postponed you for a couple days and made it the least of our priorities. This Boomerang actually runs pretty smooth, just watch your head when going up the 2nd lift as it stops pretty hard. Other than that, it's a Boomerang.


We had also hit up most of the flat rides and other attractions in the park as well as experiencing some "Never in California" type of weather. We'll let the photos tell the rest of the story.

Tommy G Robertson Railroad is a steam-powered locomotive that takes you on a half or full circle tour of Six Flags St Louis. It made for a great mid-day "get off the feet and chill" type of ride when we experienced high humidity. 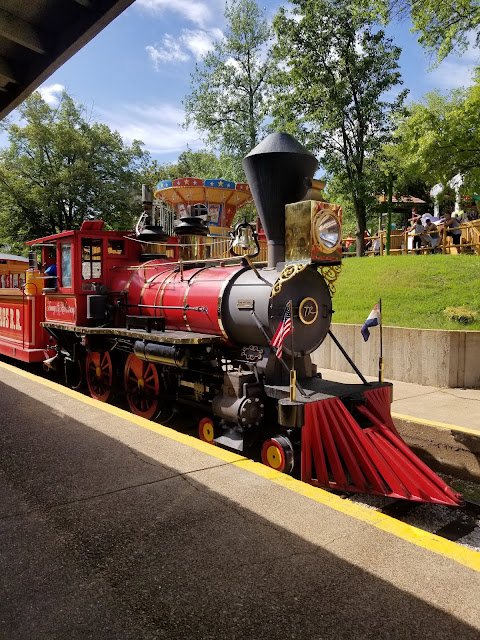 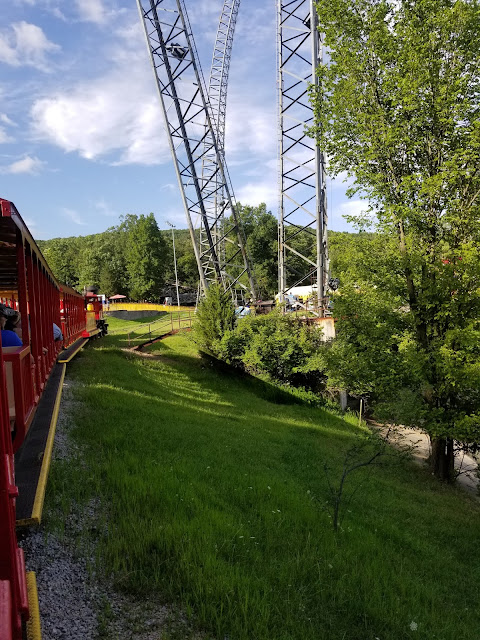 Fireball - One of many Six Flags "Vomit Rings" as we like to call them - surprisingly did not make me sick. My first run with one of these rides left me feeling ill about midway through the ride, hence the "Vomit Ring" name we have blessed this ride with. The Larson Loops (as they are known as) get a bad rap among enthusiasts as they have been marketed as roller coasters. They are more of a thrilling flat ride. They are pretty fun and when you get a skilled ride op running it, they can leave you dangling upside down. The cycle on this however was rather basic - 3 rotations 1 way and 3 the other way before calling it a day. 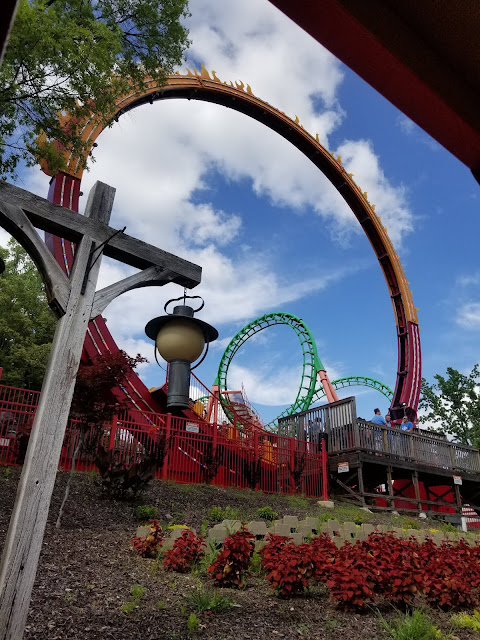 Colossus Wheel - this is the park's ferris wheel which sat dormant for most of the visit but we finally saw it running on our last day. Like the train, this is an excellent "get off the feet" kind of ride. On a hot day, you can feel a gentle breeze up top. When we rode it, the wheel made a continuous motion similar to Justice League and Pandemonium's loading process. It was about a 12 minute lap around the wheel, offering nice views of the park. 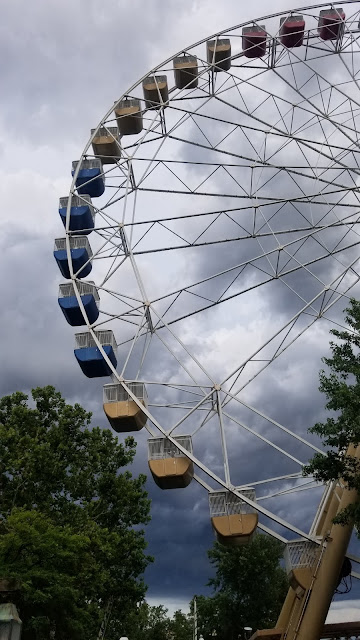 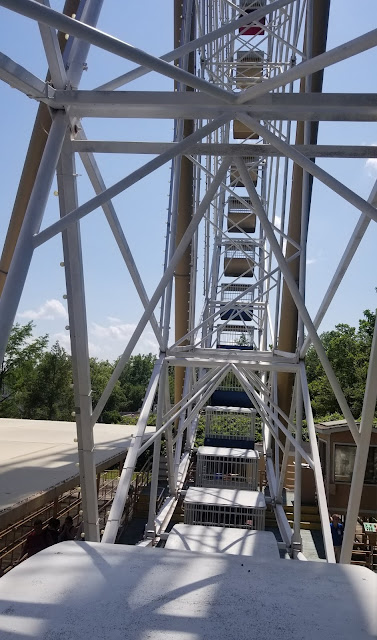 Grand Ole' Carousel - the oldest attraction in the park. The Carousel was originally built in 1915 by the Philadelphia Toboggan Company. It features wooden carved horses. 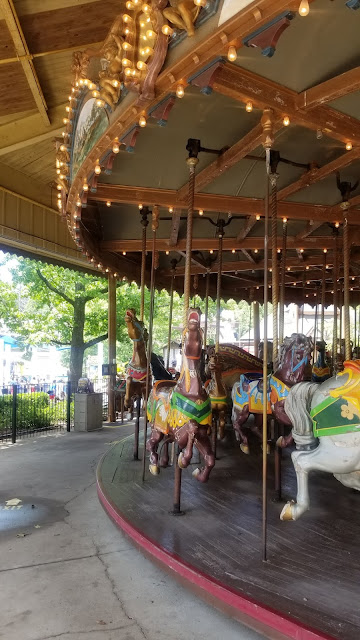 Log Flume - This short but sweet Arrow flume ride was good enough for a quick cooldown. Lines remained short and on busy days, both flumes were running. Not sure why 1 channel has no water running down yet its operating. 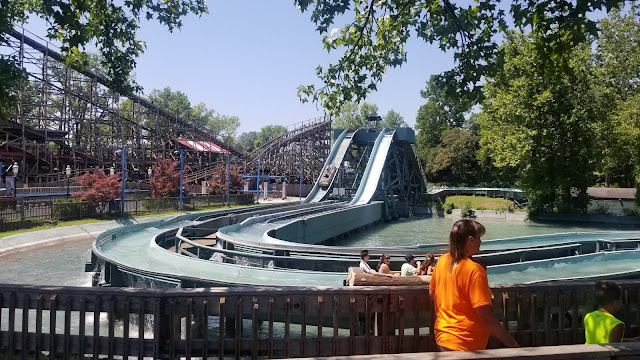 SuperGirl Skyflyer - This is SFStL's newest addition, replacing their Enterprise attraction (which was similar to Orbit at Great America). SuperGirl is a Zamperla Endeavor, which can be seen and described as a modern Enterprise. It was a fun, zen-like experience. Though capacity is reduced on this 24-rider model (compared to the 48), it was nice having a more open view around you. Oh, and the noises this ride makes was rather amusing :) 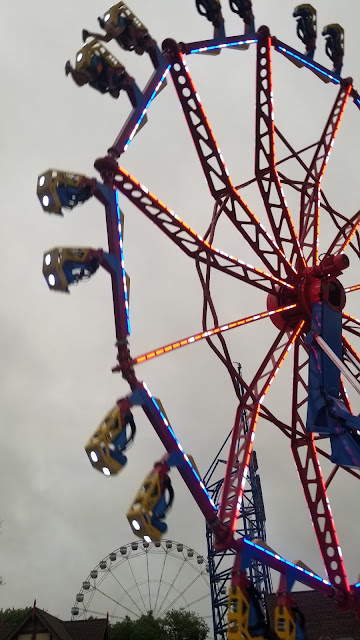 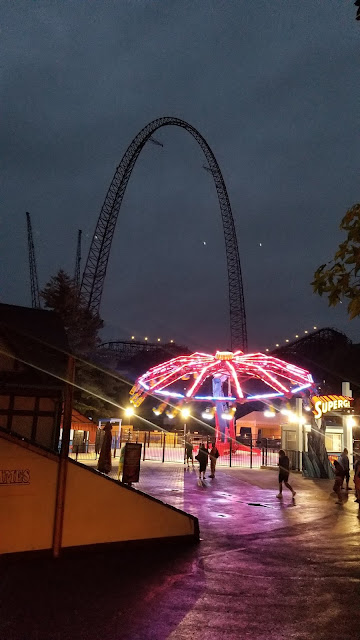 SkyScreamer - the 200+ foot edition. This made the one at SFDK feel tiny. This particular one looks even taller as it's perched on a hill. SkyScreamer offered great views of the park and beyond - we were able to spot some scattered rain on the horizon as well as get a rather brief but refreshing cool down. It also offered some nice forces about mid cycle when it would begin spinning faster. 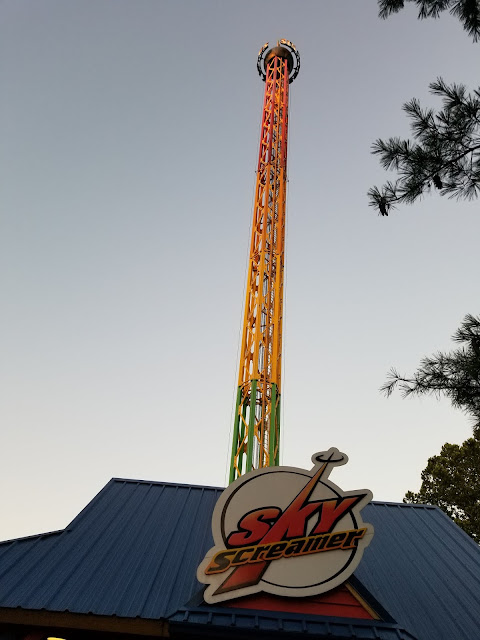 We had experienced some of that midwest summer thunderstorm activity. We had just boarded Justice League as it was sunny, few clouds off in the distance. As we exited the building, it felt like we were dropped off elsewhere as the sky had turned rather gray. 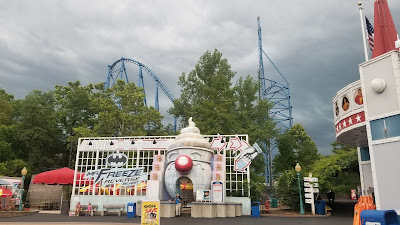 Park had closed a few hours early so as we got back to our hotel, we opted to enjoy the free entertainment that continued into the evening.

Here's a brief look at the light show from our room as we were drying off:
https://www.instagram.com/p/B0Cns4THpLI/?utm_source=ig_web_copy_link

We found Six Flags St Louis to be an enjoyable park and over the several days we had there, "rough Six Flags experiences" felt rather minimal. We had anticipated at least 1 rougher day but that was not the case. Rides had began cycling prior to opening and as there was not any dead ends with a cluster of closed rides, when we did find that a particular attraction we wanted to do at rope drop wasn't ready, we just tried something else close by and returned to an operational ride. Breakdowns felt minimal too, with the exception of 3 rides that are down for an extended rehab: Xcalibur (Evolution flat ride), Superman Tower of Power (Intamin Drop Tower identical to CGA's), and Tidal Wave (a shoot the chutes ride). If you're in the St Louis area or are doing a midwest trip with several parks, we recommend adding this to your plate.