We've been a little busy as of late and we are due for a California's Great America update! While we were back at St. Louis, Great America had began teasing their 2020 additions. A phrase was painted on the ground near the 2 body slides that read "Boomerang Bye August 8." We are approaching that wonderful time of year when parks ready their big reveals for the following season and park enthusiasts anxiously await for those announcements whilst making predictions. While we don't know exactly what details are happening over at Boomerang Bay (what kind of slides will be going up as well as what else is happening), it's pretty straight forward that we are seeing some form of slides being added.

As we know, Boomerang Bay began with very humble beginnings with a sprayground, rain fortress, and a trio of slides as a replacement for Stealth (Vekoma Flying Coaster) and a new business opportunity during the Paramount era. During the course of the seasons, small additions were made in stages including the addition of a lazy river, 2 body slides and a small lagoon. In 2007, Boomerang Bay had its latest addition being the wave pool. It now appears to be on the next step of additions for the relatively small water park. 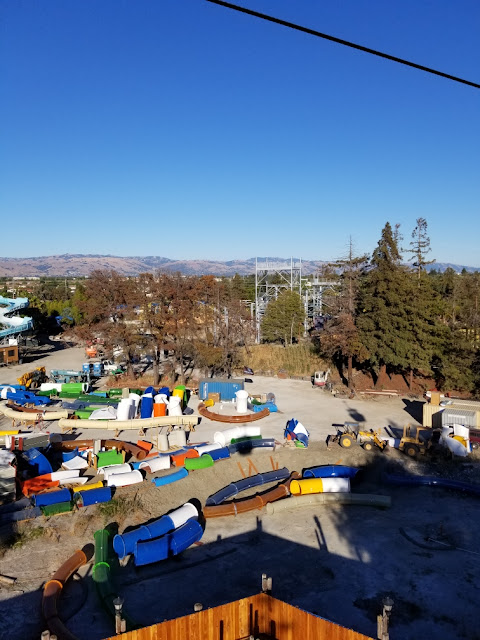 All along, numerous water slide segments have been laid out and have been partially assembled in what looks like a staging area where the log flume once sat - looking reminiscent of something I would have done as a child when building a new Lego set with bricks scattered everywhere :)

Over the past 2 weeks, 2 steel structures began to rise behind the walls over where the old Peanuts Playhouse theatre used to be. As of 8/2, a good chunk of these towers look complete and several smaller metal supports have popped up around the 2 central towers.

Lastly, over at the opposite end of Boomerang Bay, just a little bit behind the Outback Shack (Across from Mass Effect), a new building structure has began to rise as walls have gone vertical. There's speculation as to what it could be and we'll leave it at that as we wait just a few more short days for the big reveal of what California's Great America is up to for the 2020 season.

Stay tuned for the big announcement coming August 8th!
Posted by Thrills by the Bay at 20:54